Kazakhstan Landmarks - that you can't miss.

The first one is the highest of all the Kazakhstan Landmarks that you can't miss when arrive in Kazakhstan. So watch for it. ;)

It's the highest peak of the Tengri Tag mountain range. Tengri Tag means "Heavenly Mountain", i.e, Tian Shan. Khan Tengri is the most northely seven-thousander in the world, as they say in the mountaineering circles.

It has got an older brother in Kyrgyzstan not that far from Khan Tengri, which is about 400m (1300ft) taller. It is called Pobeda, the russian name for "Victory". 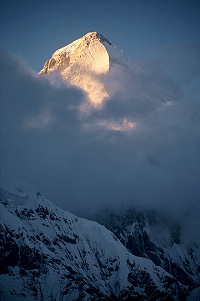 The author of the Khan Tengri photo is Simon Garbutt


As you can see in the Google Map below, it is right in the Kazakh-Kyrgyz joint border with China and it has a whole family of peaks around.

I haven't personally been up there, but they say it takes 14 days to reach 6995m. That's the geological elevation, which is equal to 22,949 ft, but actually its glacial cap rises to 7,010 m (22,999 ft). So the tourists who haven't got much time sometimes cheat by letting helicopters do part of the job.

Khan Tengri is a marble rock shaped like a pyramid. Its snowy and icy cap and correct geometrical shape beautifully reflects the sun during the day in different colours. For its sunset-red colour it was named "Kan Tau" (kan - blood, and tau - mountain) among the Kazakh nomad tribes.

The first European who noticed this giant was the great Russian explorer Pyotr Petrovich Semenov-Tyan-Shansky in 1847, the last name he got from his professional experience. Since then there were quite a few unsuccessful attempts to win the height. Finally the first conqueror in 1931 was the Ukraine team lead by Mikhail Pogrebetsky. Now this route is called the classic Pogrebetsky route.

The Charyn Canyon is another remarkable one of many other Kazakhstan landmarks. You hear people calling it the Grand Canyon of Kazakhstan or "the little kazakh brother" of the Grand Canyon. Although it reminds a smaller version of the famous Colorado landmark, it has its own beauty and features, quite different from its American brother. 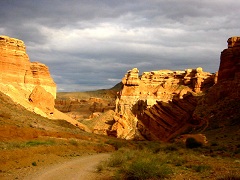 The Charyn Canyon is situated about 200 km east of Almaty, major city and former capital of Kazakhstan. It is within Kegen and Uigur regions of the Almaty Province. It stretches 154 km alongside the Charyn River. The most popular part is called the Valley of Castles for the unusually shaped formations resembling the fortress of an ancient setllement.

The image of the Charyn Canyon taken by Jonas Satkauskas

The joint cooperation of ice, sand and stone, wind and water, cold and heat over the centuries have created very impressive natural slopes, columns and arches that resemble the ancient castles and fortresses. Therefore, the locals call this part of the Canyon, weird names like the Valley of Castles and Witches' gorge etc.

The Valley of Castles stretches about 2 km long. And it is the most popular area of the Canyon.

The layers on the walls of the "Castles" can tell the experts how long they have been there. Different sources give the range between 12-30 million years, the Paleogene Period.

If you look at its satellite image, it looks as the knife cut scar through that part of the Earth. In summer the beautiful multi-colored gorge and the river serves as an oasis in the middle of nowhere and lets you appreciate every little thing, that Mother Nature has gifted us with.

If you follow the Charyn River further on, you will come to the Charyn Ash Tree Grove, a home to very endangered species of Sogdian Ash that survived the Ice Age. So don't miss that too.

More info and pictures of the Charyn Canyon 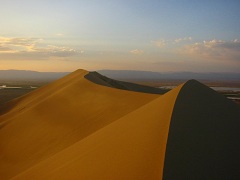 Another one of the Kazakhstan Landmarks is Singing Sand Dunes. It is about 180 km northwest of Almaty. It is 3 km sand ridge that produces various tunes, provided the favourable dry weather conditions. You can hear the sand singing from miles away. Note no singing performance in wet weather.
The image of the Singing Sand Dunes taken by Jonas Satkauskas 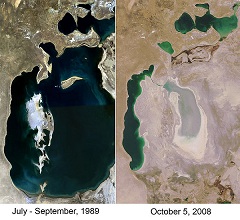 This one is the most unfortunate of all the Kazakhstan Landmarks and the one we have to talk about very carefully. It could have been a beautiful landmark. But the human errors have created the global ecological disaster instead.

Some important measures have been taken the recent decades and now slowly but steadily, we see some positive reports on this environmental problem.

Read more on the Aral Sea

Baikonur Cosmodrome is the most famous manmade landmark in Kazakhstan. It is the first space launch site in the world. Its name is connected with many historical and international space flights. Read more on Baikonur.

What are YOUR favourite Kazakhstan Landmarks?

Found gold in the Steppe? Share your story about Kazakhstan Landmarks that you love?

What Other Visitors Have Said

Click below to see contributions from other visitors to this page...

The Aral Sea - original
I would like to see the Aral Sea restored to its original glory, by rediverting the two original rivers back to the Aral Sea. I know that this is what …

What does Medeo mean?
There are many versions of the origin of the word "Medeo", aka "Medeu". One of them requires a greater attention. The theory has even been proved by Professor …

History of Shymbulak
Chimbulak has been discovered by amateur skiers only at the end of 1940s. It seemed an ideal spot for many types of skiing activities. And not that …

Chimbulak Map
Click Here To See The Map In A Larger Scale Here are some dry facts about Chimbulak Ski Resort, as well as the map of Chimbulak Plateau with the ski …