One of the places of interest in Almaty is the Ascension Cathedral - the Almaty Russian Orthodox Church. 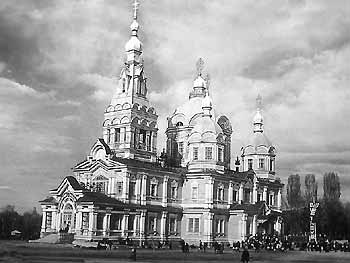 It is a 54 meters (177 ft) high orthodox church, the second tallest wooden building in the world. Been there?

Share YOUR experience with other visitors of this site.

A Brief History of the Ascension Cathedral 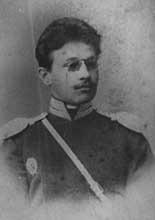 It was built by an architect Andrei Zenkov, famous as a founder of earthquake-proof construction. Therefore, the locals still call it the Zenkov Cathedral.

The first street to first east from the Cathedral is named after Zenkov.

The image of Andrei P.Zenkov

In 1887 there was a major earthquake in Verniy, todays Almaty. It demolished majority of brick buildings. As a result the era of earthquake proof buildings started in Verniy.

One of them was the Cathedral, which was built during 1904-1907. In  1911 the building proved its quality, as it was one of the few buildings that survived the earthquake.

During the Soviet era it was used for many various purposes, but the church.

Fall of the communist regime in the USSR gave a second breath to religion in all post-soviet countries. And in 1995 the building was restored and given back to the church to be used for its direct purpose.

Where is the Zenkov Cathedral?

It's not hard to find the Zenkov Cathedral in Almaty, as it's situated right in the city's historical center. If you find the Panfilov Park, you can find the Cathedral.