Why is the Aral Sea shrinking?

Let's start from the name of the Aral Sea. It means the Sea of Islands referring to 1500 islands that existed before.

According to the map by Claudius Ptolemaeus (ad 90-168), a greek scholar, the Caspian and the Aral Seas were joint together, forming a huge inland sea. Then Zaraphshan and Amudarya rivers flew into the Caspian Sea.

In 1848 Alexei Butakov, an Imperial Russian Navy officer and researcher started the first ever survey of the Sea to make a proper detailed map. By 1850 the map was ready and published. 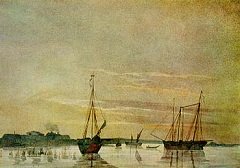 The exiled Ukrainian poet and painter Taras Shevchenko participated in the expedition, and painted a number of sketches of the Sea coast. 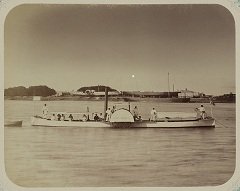 The future researches thereafter were carried out the same time as the military actions to join the Central Asian countries.

The Beginning of the Disaster

Check the Aral Sea Map showing the shrinkage over the last decades.


The abuse of the rivers, main arteries of the Aral actually started in 1930's, with the mass construction of irrigation channels. Years 1960-1990 the agricultural land area has doubled, so did the water consumption. 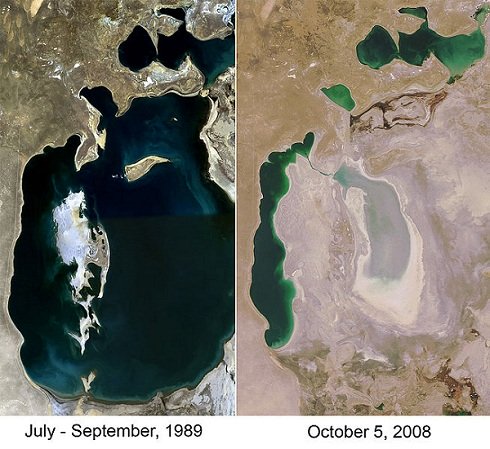 The soviet government has achieved its ambitious goal to be the world's major cotton exporter. But at what cost!!! Within half a century the Sea lost 90% of its volume. It became too salty even for the sea fish.


View in a larger map

Aral (former Aralsk) town is separated from the sea by 80 km of semidesert land.

As a result in 1987 the shrinkage has naturally divided the Sea into three parts. The northern part as a whole was in the Kazakhstan side. And the Southern Uzbekistan part was divided into two. 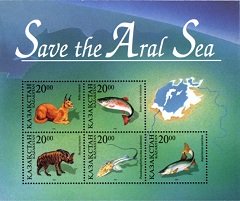 After the collapse of the USSR Kazakhstan decided to correct the situation at least on its own side, which is todays North Aral Sea, fed by the Syrdarya River. Although the first two attempts have failed, in 2005 Kazakhstan was able to give it another go. This time the water levels have risen faster than expected and fish stocks increased. Now as this plan worked, the government is ready to build another dike. 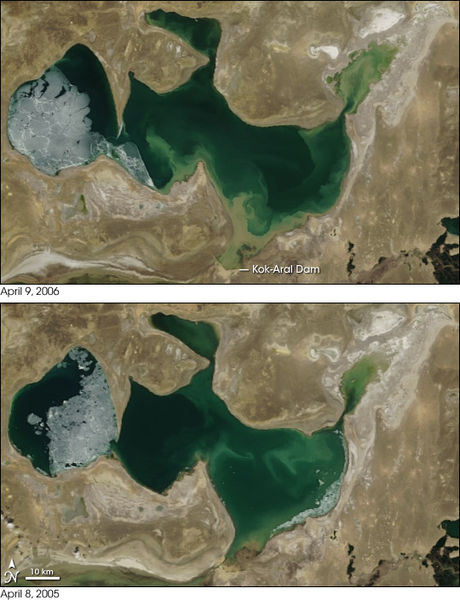 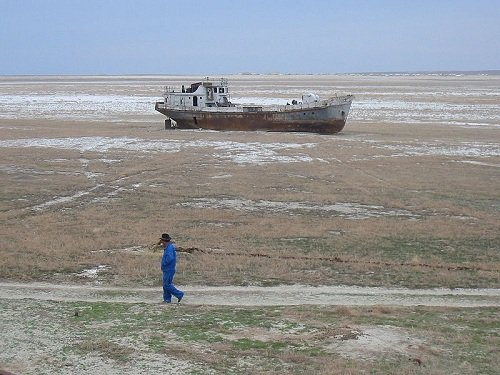 The Old Man and THE Sea?

It's always simpler to grasp what you see rather than what you hear. Therefore I thought I'd share these two videos that I found quite informative. Just letting you know that the first one is just over 10 minutes long and the second one is about 5 minutes. OK, here we go.

This one is the courtesy of Emma Griffiths

Here is the one from Simon Reeve

Do you feel like adding YOUR own story of the Aral or comment on any articles reflected on this page? You can do it here. You don't have to register or give us your details to do so. It takes a few simple steps. Ready to add your story and comments? Then let's go.

Back to Kazakhstan Landmarks

Return to the Guide to Kazakhstan home page