Almaty, the major city of Kazakhstan used to be called Alma-Ata right up to 1993. It was first mentioned as Almatu in books from the 13th century. In both names the root of the words is "Alma" which means "Apple". What has it got to do with the name of this city? A lot.

The apple trees originated in Central Asia and North-West of China in the foothills of the "Heavenly Mountains" (Tian Shan). There are many wild apple trees in and around this major Kazakhstan city.

I should probably mention that for about half of the XIX century an beginning of the XX century, just before the soviets came to power, it was named as Verniy. It meant "loyal" in Russian.

Click on the image to view in a larger scale 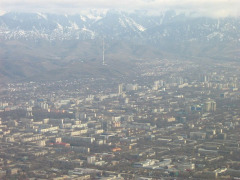 Almaty is situated in the south-east of Kazakhstan quite close to its borders with Kyrgyzstan and China. That's why it's where most visitors start their exploration of Central Asia, yet undiscovered, less travelled and unspoilt regions of the world.


During its period as the capital of Kazakhstan, it got lots of attention from the Soviet Center and had the best trasportation connections established with the outside world. That's why it is very convenient for many international flights to arrive at the Almaty Airport.

Moreover the weather in Almaty is the most favourable for summer or winter activities. The snow in winter and the sun in summer allows many types of outside activities for travellers. And it is within a short distance from  some major must-see Kazakhstan landmarks and other tourist attractions.

Within an hour you can reach the man made water reservoir Kapchagai with its sandy beaches or you can get as high as 2000 meters (6561 ft)to the Chimbulak Ski resort or Medeu Skating rink, go fishing for trouts. You are within 2 - 3 hours maximum to get to the Singing Sands or the Charyn "Canyonette".

You can actually walk to Kyrgyzstan through the mountains, which can be arranged through many touristic companies. What a hiking it is. Of course you need to have your papers in order. You can also visit China if your visa is in place. It's about 4 - 4 1/2 hours drive to reach the border.

If you decide to stay in the city there are many indoors activities as well. You might also enjoy going to the Zelyoniy Bazaar (the Green market), as you can buy the fresh and dry fruit and vegetables, as well as all types of meat, honey, korean salads, milk products, just about anything you need.

Back to the Alma Ata page

Return from Almaty to the Kazakhstan Discovery home