This page is more about the history of Almaty, formerly known as Alma Ata, so if you are looking for information about modern Almaty please do follow the links below:

You can also find the photos of modern Almaty by simply following this link.

The city of Alma Ata had several names throughout its history. For centuries its area had been settled by various tribes.

Loyal to the Tsar?

However, the serious settlement of todays Almaty, (its new name) started in 1854 as the Zailiyskoye Military Fortification.

The population consisted of 457 soldiers and officers. Later it was renamed Vernoye, meaning "Loyal" in Russian. 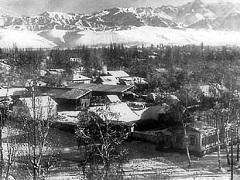 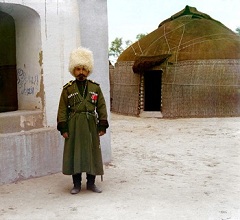 The image of a Semirechensk Cossack

The Cossack Stanitsa and the Tatar Sloboda villages were founded on the Zailiysky mountain ridge between the rivers Bolshaya and Malaya Almatinka. By 1859 the population had rapidly reached 5 000. Cossacks were more military orientated, while Tatars were merchants and craftsmen.


By 1867 as a result of intensive "industrial" development, the Vernoye Fortification got the status of a town and became the administrative centre of Vernenskiy district ("uezd" in Russian) and Semirechensk province ("oblast").

Verniy is located in an area of extensive geologic risk, being subject to both earthquakes and mud slides. 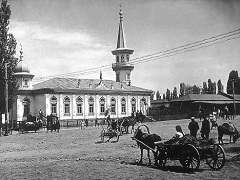 Destroyed by the major earthquake. Now the Universam shop is on its place. 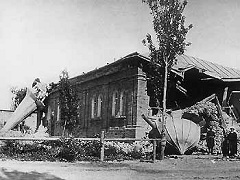 28 May 1887 the destructive earthquake took place in Verniy.

Life was just back to normal

The extract from the report of 1909 "Russia. Complete geographic description of our motherland" edited by Semenov-Tian-Shanskiy:

"Verniy is the post of duty of Turkestankiy and Tashkentskiy bishop. The population of the city is 37, 000 people (26 000 – Russian, the rest – taranchi, dungane, sarty, Tatar, Kyrgyz; in Verniy there are 2 100 buildings, 9 churches, 4 mosques, 18 educational institutions, a small regional museum, 66 plants and factories with 313 working places."

Streets of Verniy after the 1911 earthquake

Another earthquake 10 points on the Richter scale strikes Verniy on 1911. 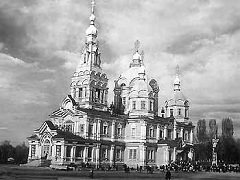 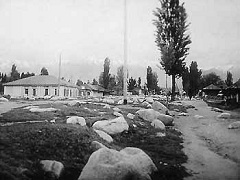 Kunayev street 1921 after the major flood

And the same year...

5 February 1921, extract from the Semirechenskiy military and revolutionary committee meeting:

"The former name of the administrative center of Semirechye that was given to prove loyalty towards colonialism is not acceptable when the city becomes the revolution center. Form now, Verniy is called Alma-Ata". 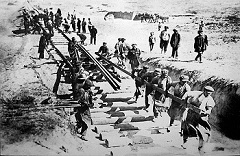 
In 1927 with the construction of Turksib, the railway connecting Turkestan with Siberia, the capital of Kazakhstan was officially transferred from Kyzyl-Orda to Alma Ata.

Government officials and agencies moved to the new capital on the first pilot train to Almaty in May 1929. By then the population had incresed to 100000.


By 1935 Alma-Ata was connected with Russia by airway as well. The Almaty Airport was put into operation. New building were built, universities opened.

The WWII had given some economic and demographic boost into the city's growth. Stalin exiled many so called "People's enemies", the soviet elite, to Kazakhstan.

Many people have been evacuated during the war from the front. Factories as well as their working force were relocated. Many Koreans have been forced to resettlement from the Far East.

Years 60-80 Alma Ata had its first proper face lift for years to match its status as the capital. Hence many earthquake proof houses, dated 60s and 70s, the Hotel Kazakhstan, the Arasan Baths, the Academy of Science and many many other buildings.

To reduce the risk of future mud slides, the 330-foot (100-metre) Medeu Dam was build in 1966, that proved its capability in 1973 by holding back a potentially catastrophic mud slide. Later improvements have raised the dam to 460 feet (140 m) and further improved the security of the city. 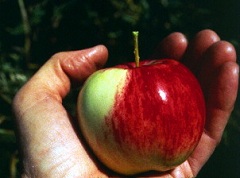 In 1993, two years after the fall of the USSR, Alma Ata was renamed Almaty. By the way Alma is an apple in kazakh language and together with the suffix "ty" they mean the Apple City. And the population according to 2009 cencus is 1 420 747.

The video answer to where Apples come from?