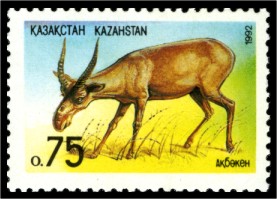 Kazakh Steppe is home to a rare endangered species of fauna Saiga Antelope.

1992 Stamp
of the Republic of Kazakhstan

Where do the Saiga-Antelope inhabit

The transparent area on this map of Eurasia shows the area the Saigas inhabited historically. When you compare it against the green areas, shown on the map as their current locations, you see a huge difference.

The red dots mean the distribution of the Mongolian Saigas, an almost distinct species. 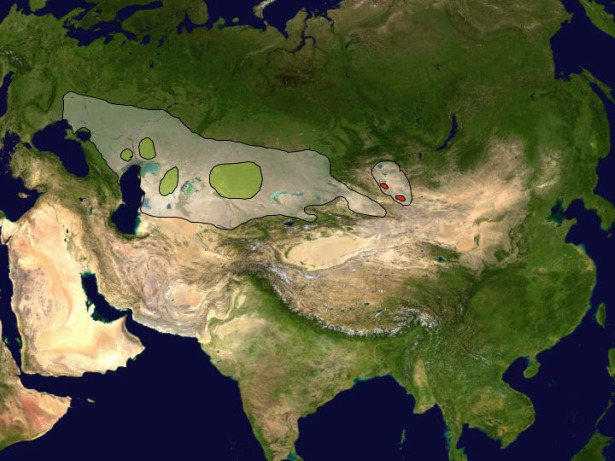 You can read the article on Wikipedia on the distribution history of these Antilopes around the Ice Age. As soon as we (human race) started inhabiting the Steppe, our presence have affected the rapid decline in numbers of the Saigas.

In 1920 they were almost distinct, but thanks to certain measures to prevent their dissappearance and their own productivity, they were able to preserve and even grow the population of saigas.

Later on the WWF encouraged Saiga hunting for their horns could be alternative to those of rhinoceros. It lead to another rapid reduction of the number of the Saigas.

And this year when the Republic of Kalmykia of the Russian Federation announced 2010 the year of Saiga-Antelope, unfortunately, another massive loss occurs among the Kazakhstan population of Saigas.

2010 has also been not a lucky year for the Saigas of Kazakh Steppe, where about 12 000 of them died due to a disease.

Saigas on the Latest News