Yes, today many people in Kazakhstan will be congratulating each other on the Old New Year. It's not an Official Public Holiday, so please do go to work/school. ;)

You can say to your friends, collegues and just anybody you may know or not "Sa Starym Novym Godom" ("Happy Old New Year" in russian.) And you should normally get a smile back and should hear something nice like "Spasiba, Vas takzhe", meaning "Thank you, the same to you".

The Slavic Orthodox of the former USSR used to follow the Julian Calendar before the 1917 Revolution. Since 1918 the Bolsheviks introduced more popular in the west the Gregorian Calendar. However, the Russian Orthodox informally continued observing the Julian.

According to the very calendar the New Year now falls on 13/14 January. So there is about two weeks difference between the Gregorian and the Julian Calendars.

Now there are two New Year Holidays in Kazakhstan, as well as in some other former Soviet Union countries, and as some countries of Eastern Europe. 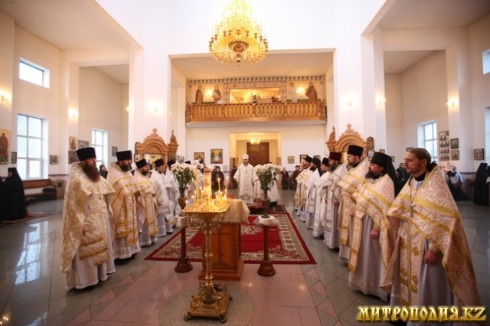 Just for you information, the 1st of January is the Official New Year in Kazakhstan by the Gregorian calendar followed by the 7th January Orthodox Christmas.

Image is the courtesy of Mitropolia.kz

So if you were in Kazakhstan on the 7th January, you should remember the Official Christmas Holiday you had on that day. You didn't go to work, did you?

Join in and write your own page! It's easy to do. How? Simply click here to return to Your Kazakhstan News.